You could be forgiven if, after walking into this bar for the first time, you thought you might have stepped into the Boston Bull and Finch—aka the “Cheers” bar. There is a large square bar area with loyal customers in the bar seats, some booths and tables around the outside and an apparently tightly-knit cadre of employees making sure it runs right. 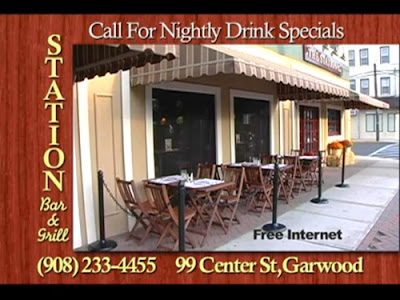 That was my first impression after having been invited to visit by comely Kristen Kelly, who was working the 36 taps (pouring some really good beer) this night. Kristen had visited my PubScout Page on FaceBook. She had been apprised about my regular blog (the one you're reading right now) by a customer, but went to the FB page to extend the invitation: “Hey, I work at a craft beer bar in Garwood.  TheStation Bar and Grill. I was wondering if you'd be interested to come and check us out some time.” 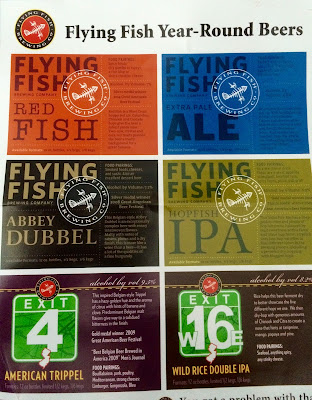 I had never been there, but a few of my friends had, and they recommended it, too. So off I went for a special event on October 9—a tap takeover by Flying Fish. FF was offering a slew of their great beers—Exit 4, Exit 16, Abbey Dubbel, HopFish IPA, Extra Pale Ale and the outstanding RedFish. I had heard nothing about the food, but I figured I’d find something.

With nothing to lose, the missus and I headed up to meet our friends "Yellow School Bus" Ron and "Pope" Mimsy Adamson for a bite and a brew, whose home is maybe three minutes from the place. I introduced myself to Kristen, and we took a seat at a side booth. 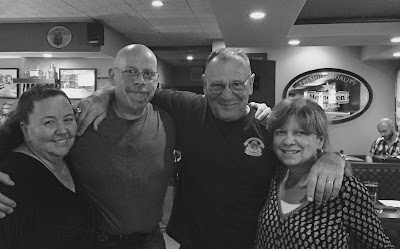 That’s when the night took a decidedly serendipitous turn. Our server, a pretty bundle of energy named Carrie who looked far younger than her actual years, came and introduced herself.

After making suggestions (hers was to order “Brian’s Brother’s Wings), taking our orders and bringing us our beer I began my usual chit-chat with pretty, efficient waitstaff. She offered information about the place, the owner, Brian Cruikshank and herself.

But we forged a lasting bond immediately when she informed us that she was a kidney transplant recipient. As my readers know, my eldest son is on dialysis and waiting for a donor in North Carolina. With my mouth and that of the missus agape, the serious forging began. She was a veritable treasure trove of information and help, and we exchanged contact info, vowing to stay in touch.

Our food came out. Brian’s Brother’s Wings were delicious--and exactly as Carrie had described. If Carrie suggests something, get it. Ron and I made short work of them, which in retrospect was probably why I couldn’t finish the gargantuan, juicy, perfectly cooked “best burger around” that Carrie had also suggested. For the record, the RedFish went perfectly with both.

The missus allowed that her crabcakes were delicious, Ron exclaimed about the incredible tenderness and flavor of his Rib-Eye Steak, and Mimsy enjoyed her Filet Mignon with a big smile.

Ron and I ordered up two excellent Exit 4 Trippels, and I was pleased to meet with a few former students, Rob and Sue (who worked there, but looked the same as she did in high school), a very beer-savvy customer named Paul who designs the Friday Night Flights for Brian, and Brian Cruikshank himself.

I chatted with Brian for a bit, and learned that it had taken him two years of hard work to turn the bar into a welcoming, bustling place where “everybody knows your name.” He spoke very highly of his clientele, and shared an anecdote about a day early on in the process which saw both his ice machine and his air-conditioning go on the fritz.

He came out of the back where he usually works with a dejected look on his face, and when his customers asked what was wrong, he told them. Apparently, the exasperation and frustration in his voice was clear. But his customers immediately took to their cell phones, made contacts with folks who could help and within twenty minutes, a slew of repairmen walked in to fix the problems. If they were smart, they took their compensation in food and beer, but that’s just me. “That’s the kind of people who come here. And that’s what makes me want to do right by all of them,” said Cruikshank, who trusts his front staff to handle all the beer related issues.
In terms of his beer and beer lines, he is certainly doing right by not only his old customers, but his new ones. Assiduous about cleaning his lines and rotating his taps, his beer offerings are nothing short of excellent. Go here to see what’s available. Ron ordered a third— Anderson Valley Pinchy Jeek Barl Bourbon Barrel Pumpkin Ale, which is kept on year round due to demand—and he said it was excellent. My dessert was an Anderson Valley Wild Turkey Bourbon Barrel Stout served in an appropriate glass can. Cruikshank does things right, for sure.

The Station Bar and Grill not only met, but exceeded my expectations, and it fits in perfectly with The PubScout’s motto—Good Pubs, Good Beer, Good People.

By all means, go. It won’t be long before everybody knows your name, too.

Stop by my Facebook PubScout Page to stay current and say hello!