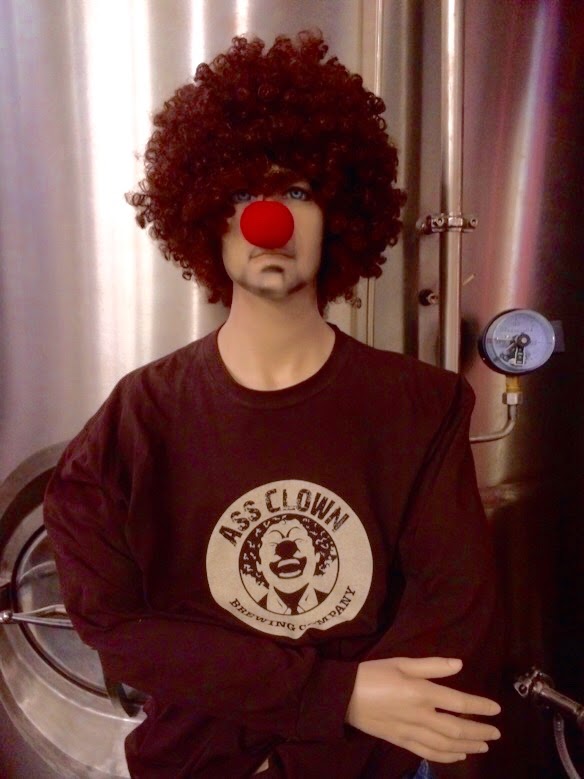 While attending to my son in NC last week, I learned of a brewery very near his place called Ass Clown, and during a break, I headed over to the “Tasting Room” to see what kind of beer would be so bold. I operated on the assumption that if you’re going to call yourself that, your stuff better be good.

Ass Clown was born in 2011, as near as I can determine, and, like most, started small. More like an actual pub, complete with tables, bar and flat screens, the place was packed. I learned that this is typical for Saturdays at this very unique brewery, which houses not only the usual beer-making equipment, but also a Sour Beer Lab and the ability to produce four different varieties of wine. 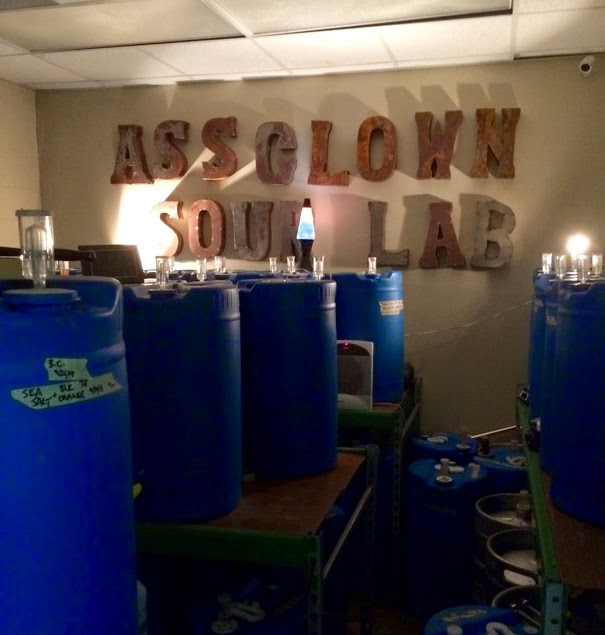 Matt Glidden, a former Vermonter, is the owner/brewer, and apparently possessed of a “can-do” attitude that takes a back seat to no one. He grows his own organic coffee and hops and uses mostly local ingredients to create a wide array of beers. Viewable on his site, the range of flavors is nothing short of astounding. He also strives to be “environmentally responsible.”

With an eye towards being “green,” he even has craftsman Jeff Greeno making the custom tap handles on site—three handles to a block of old fencewood, and a host of volunteers like Ralph and Amanda helping out in various capacities. It was Ralph, in fact, who led me to the working guts of the back room where Ass Clown makes its brews.

Ralph is designing a bottler for the growing demand of the brand, which still bottles by hand, and Amanda was tending to the 30 taps with regularly rotating beers, trying to slake the thirsts of the customers who packed the place.

A four-beer sampler (with six-ounce pours) is available for $8, and the many serving palettes were also designed and hand built by Glidden. Pick your beers, and Amanda will inscribe exactly what they are in black Sharpie so you can keep track.

I ordered a Honey Pale Ale (excellent), a Rum-soaked Stout (delightful), a Dark Chocolate Stout with Sea Salt (worth a few growlers or grunts, for sure), and an Imperial IPA, which was killer.

I also sampled an interesting beer named Star Fart. Made with Star Fruit, the aromas given off during the brewing process were somewhat sulfurous in nature, leading to the name. Fortunately, those aromas do not come through upon tasting, and the beer is quite interesting and tasty.

I also sampled a sour—Citrus Sour, to be precise. Sour beers are an acquired taste, and for those whose tastes are so attuned, I recommend it. Ass Clown’s Sours usually develop in that special storage lab for a year to eighteen months.

Glidden was not in the house that day, as he was attending a brewfest in Raleigh called “Brewgaloo.” According to reports from that fest, Ass Clown, unsurprisingly, had the longest lines. Though their beers are readily available throughout the Cornelius and Mooresville areas, their distribution will hit Charlotte proper very soon, where they expect production to increase big time, and that’s not hard to understand, either. Growlers and grunts, as well as bomber bottles are available for purchase at the brewery. 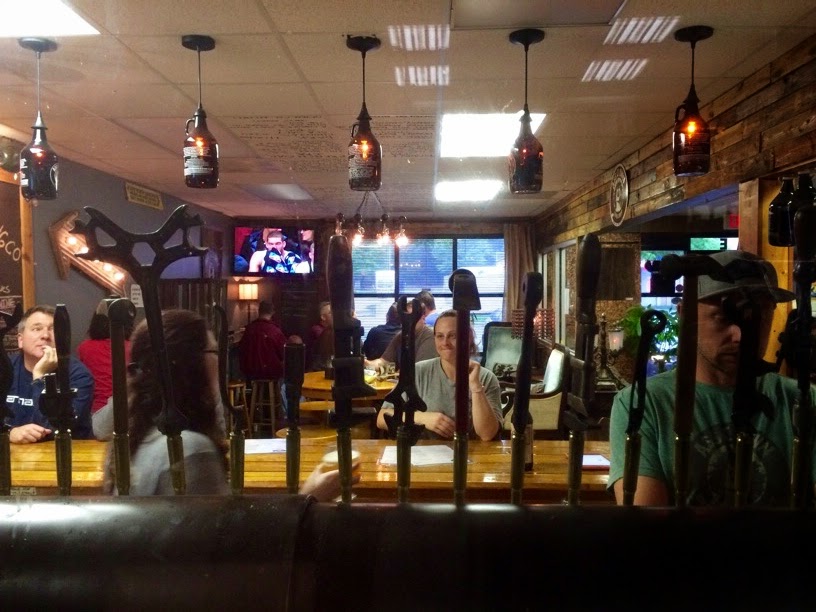 The more people that taste this beer, the more popular it should become. The name Ass Clown developed because as Glidden and his partners made the beer, they jokingly referred to each other as such.


So, they figured, what better name for their beer? And they created the promotional tag line, “Don’t Be One; Drink One!”