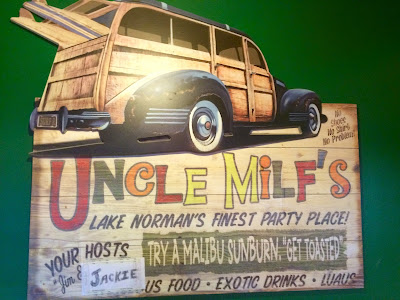 Now don’t get your knickers in a twist at the name above. According to everyone, it stands for “Man, I Love Food.”

But since I’m spending a good amount of time in the Tar Heel State at present (most of it in medical facilities) the occasional respite in a pub or tavern is most appealing, and this one was very near to my lodgings at the Hotel McVay. It also came highly recommended by the hoteliers. 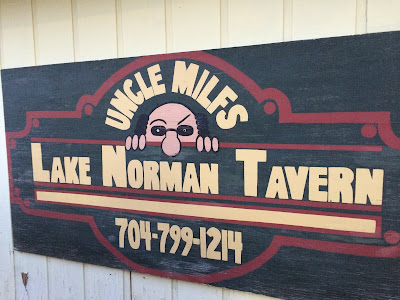 Apparently in place since many of its current customers were just kids, the tavern recently asked its customers what they wanted to see in the way of changes. The responses came back with "bigger print on the menu"(which should tell you something about the loyalty and age of many of the clientele) and more craft beers. Those requests were accommodated.

Once inside, you will not find fancy lighting, designer seats or a bank of forty-plus Hi-Def TV’s, no upscale interior and no line of gleaming craft beer taps that stretches the length of the room. It does have a few pool tables and games off to one side for those so inclined, but its décor, like its exterior, might never be described as “visually stunning.” It is, however, most comfortable and welcoming.

There was a decent beer list, both on draft and in bottles, and most beer lovers would be able to find something to suit their fancy on it, and quite a varied menu. The servers were extraordinarily pleasant and efficient. That they were visually stunning didn’t hurt, either.

If you’re up for a Brew and Burger, the choices are many, but on this night, I decided on a Sweetwater 420 and a classic Southern dish—Shrimp and Grits. I’m certainly not a connoisseur  of this particular dish, but I know what I like—and I liked this immensely. Shrimp were perfectly done, spices were deftly applied and the overall rating was a 10. Couldn’t finish all the grits either. 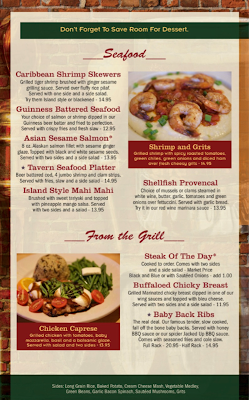 It has a “Cheers-esque” kind of atmosphere, and our dining partners, who recommended the place and visit often, met up with someone they knew—again—and struck up a nice conversation. That’s another thing about the South…friendliness comes with the territory, and it sure is part of Uncle Milf’s.

It was a great place to visit, and if I made my home in the Mooresville area, it would definitely be high on my “Go-To” list. If you’re in the area, check it out.

You won’t be disappointed. It's like NC Blue Dot says: "If North Carolina had neighborhood taverns, this would be it."
Posted by Kurt Epps-The PubScout at 9:56 AM