The Belgium Trip--Part 2-- The Cities

Second in a Series of a Bucket List Trip to Beer Heaven...for more details on a subject, click the links provided.


Our trip, sponsored by Larry Porter of Porters’ Pub and Arawjo Tours, took us to essentially three destination cities: Brugge (Bruges), Gent (Ghent) and Brussels. Of course, our brewery excursions took us to smaller cities and towns, but these three were highlighted. We stayed four nights in Brugge and three in Brussels, stopping in Gent for a few hours along the way. The cities are very different in terms of layout, size and architecture. But all are steeped in the Belgian beer tradition.

Brugge
Without question, Brugge was the most charming of the cities in my view. A medieval town, replete with winding, cobblestone streets, large medieval/gothic style buildings and cathedrals, as well as expansive public squares, it is also dissected by various canals. You can research the history of this important city here.

It’s definitely a town for walkers, and not the kind from the Walking Dead. I’d suggest taking a guided walking tour, as you’ll see parts of the city you might not stumble upon if you decided to self-direct. But horse-drawn carriages (a tad expensive)  and bateaux (canal boats) are also great ways to see the city. Only €7 (Euro) got us each a delightfully picturesque and informative half-hour canal boat tour, a most interesting way to see the city. Good weather helped. It would be a far less pleasant experience in the rain.

Off the main square or Markt, there is plenty to keep you occupied and informed, as well as well-fed and beer-sated. The Historium is an interactive, walk-through display that provides an excellent overview of what Brugge was like when it was a major hub for trade. At the conclusion of the production, you’ll be deposited directly into the Duvelorium, a classy pub overlooking the Markt and stocked with a wide array of Belgian beers, especially those from Duvel, natch. One caveat—if you need to use the WC (either before or after beer), bring €.50 for access. 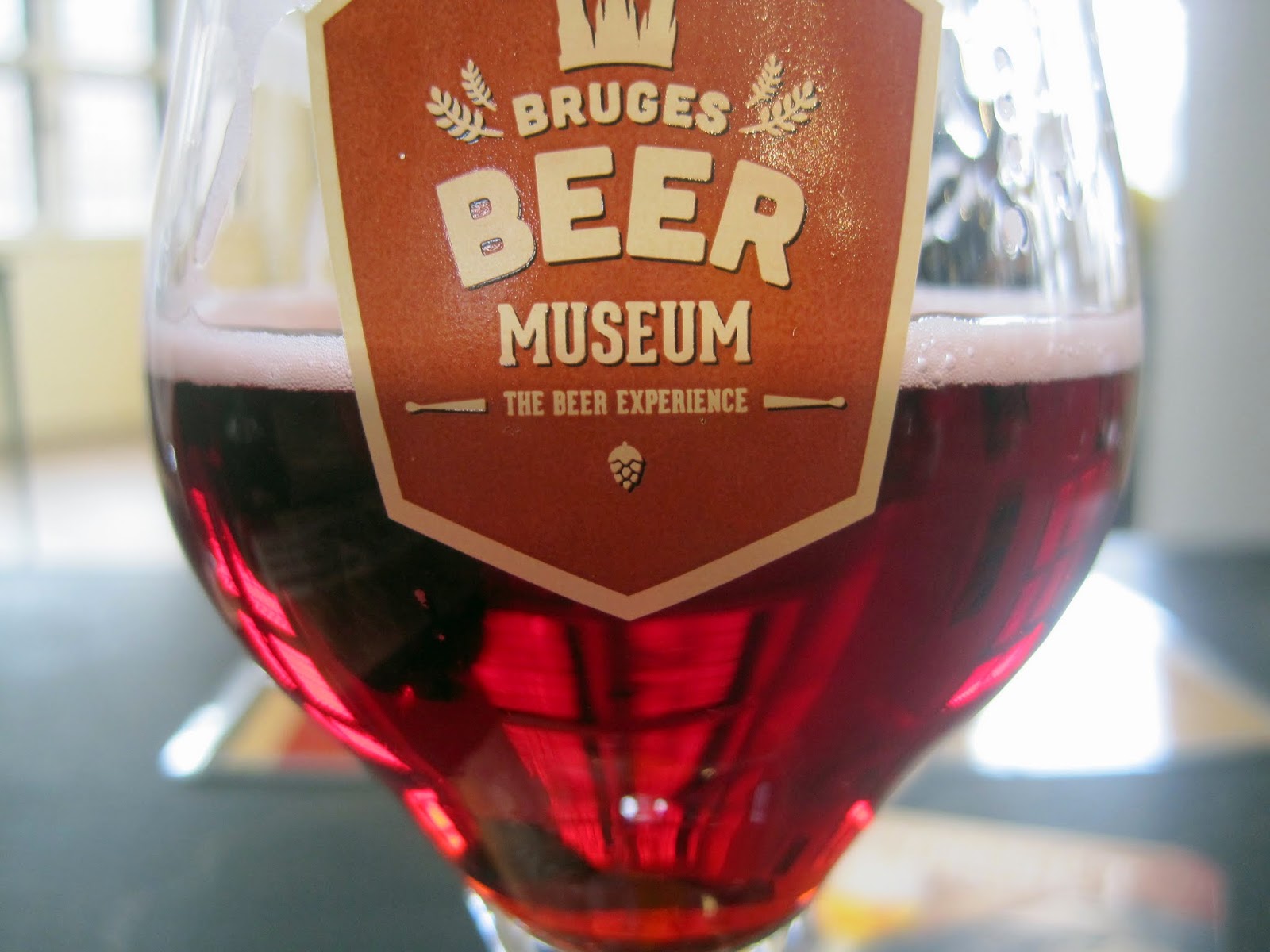 And speaking of beer, this writer found the Bier Museum, just twenty yards off The Markt, to be a fascinating place. You get your own iPad which is set to give you a wealth of information when aimed at the appropriate insignia on each display. Whether you know nothing about beer or consider yourself well versed, this two-storied attraction will broaden your knowledge; so much so, that I suggested to affable manager Lars Pillen that he present a keepsake diploma to everyone who makes it through, an idea he embraced. This attraction also ends at a comfortable, airy bier emporium where a tasting of beers is included in the admission price. You can also buy more, if so inclined, and the bathrooms are free. 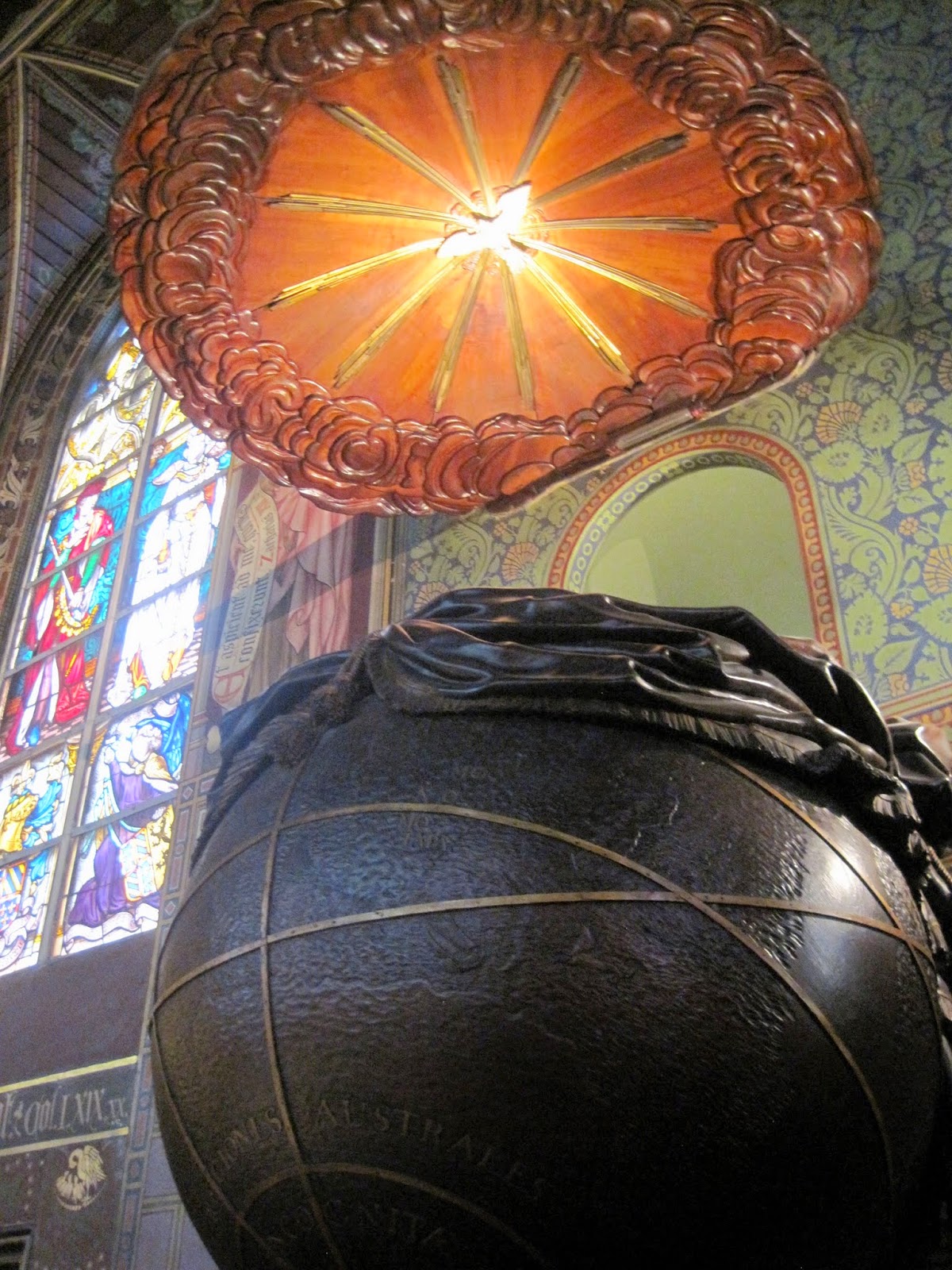 Regardless of your religious leanings, you may also want to venture in to the Basilica of The HolyBlood in the Burg Square. This building, free to enter, was constructed in the 1100’s, and I was impressed just to be in it, let alone to marvel at its stunning interior. As legend has it, a cloth with Christ's blood is preserved in a capsule there, and many have come to pray in its presence.

There are a host of other buildings to see and enter, including the famous Belfort (Bell Tower), which you can climb to see spectacular views of this fairy-tale town.

Also an impressive old town, this city has a mixture of Gothic style places and canals, as well as some more modern buildings and a more modern “feel.” A “college town,” you’re likely to see far more students as you walk through. But by all means, visit St. Bavo’s Cathedral. Currently undergoing restoration, it is still accessible, massive—and free. Gothic cathedrals, which sometimes took up to sixty years to build, are designed to draw your eyes heavenward whether inside or outside, and St. Bavo’s is no exception. But be sure to go downstairs into the crypt to see the tombs of various bishops, their clothing, their treasures and other statuary. Also worth noting are the frescos painted (at the time) on the pillars in wet chalk. Covered over by regular paint for many years, their presence is a relatively recent discovery.

There are certainly other things to see here, like St. Nicholas’ Church and Gravensteen, but our limited time, and the rather chilly, windy and raw weather did not allow for a more extensive experience. (That same weather, however, gave us a perfect excuse to seek shelter and sustenance in a pub.)

Brussels is as big and bustling as you would expect the capital of Belgium and “the Heart of Europe” to be. Yet, her historical roots are on full display in a host of places around the city, and in the spectacular buildings on the Grand Place—including the very house where Karl Marx first penned Das Kapital.

Our hotel, the beautiful Radisson Blu, was a short walk to the Place and other interesting places, like the statue of Manneken Pis. I still don’t understand why a statue of a little boy urinating is such a tourist magnet, but it is.

Our hotel was also a half-block from the legendary beer bar La Morte Subite, but more about that later. Surrounded by pubs and restaurants our home base was ideal and didn’t require spending a single Euro to navigate, unless you opted, as we did one day, for a three-hour luxury bus City Tour. That showed us much more than we could have seen on foot, including The Atomium, the National Basilica and various other must-see sites, many with spectacular panoramic views. In fact, the normally sleepy National Basilica was abuzz with activity during our visit, as it was prepping for a visit by King Philip the next day to commemorate the end of WW1. Student choirs, a thousand voices strong, were on hand for the event, and lighting was being set up for this major TV event. Our group traveled to the rooftop to gather in some outstanding city views.

Brussels was also proximate to various lambic breweries which we visited, too, but again, those will be discussed in a separate section. For all its sophisticated modernity, many of Brussels’ streets are still narrow and winding. Whatever those bus drivers get paid to navigate them is far too low.

An important point about tipping: it is not considered compulsory there, as servers' tips are already built in to the tab, as well as a VAT (Value Added Tax). Supposedly, they do not rely on tips to make a comfortable living. I wish I had learned that ahead of time—and before earning the title of “the Generous American” at every pub and restaurant previously.

And though Euros are neat, they do resemble play money a bit. But every dollar is equal to just .8 of a Euro. So be advised: a €50 tab isn’t $50. The rate changes daily, but at this writing, it’s equivalent to $62.14.
And that ain’t play money by anyone’s definition.

Coming next: The Pubs and Restaurants