Life is Not a Dress Rehearsal...


After four days of work, I just finished my account of a beer trip to Belgium that has been on my bucket list for many years. It will be appearing at greater length in the upcoming issue of NJ Brew, so be on the lookout.

My affinity for Belgian beers began with Michael Jackson’s book event in NYC sixteen years ago.

And suddenly, someday was here.

My dream trip is now a collection of memories and digital pictures—recollections of new places, new foods, new beers and new people, including the always delightful experience of making some new friends.

For The PubScout, beer is more than just a liquid to be imbibed, evaluated, assessed or categorized. It is tied inextricably to a moment and a place. I could get some Belgian beers and sit in my (or your) Barcalounger while drinking them, but it’s just not the same as drinking them while looking at a four hundred year-old cobblestone street, a five hundred year-old pub or a six hundred year-old church, all from a sidewalk or through a mullioned window from a fireside seat. 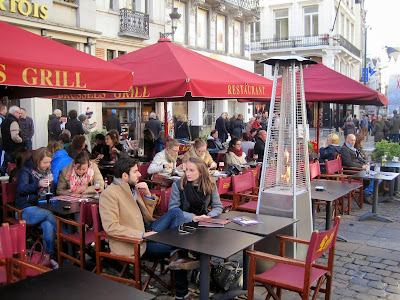 And special is the memory of sipping a Duvel, a Delirium Tremens, a Le Garre, a Kwak, a Tripel Karmeliet, a Chimay, a Westmalle Tripel, a Rodenbach Classic or Grand Cru, a Boon Kriek, a Brugse Zot Bruin, a Westvleteren 12, a De Struise Double Black or a Timmerman’s in just the right place, at just the right moment—and in just the right glass.

Good memories like that are the nuggets we take out as we age to warm ourselves, assuring our inner souls that a credo like “Life is not a dress rehearsal” has true worth.

I used to say that anyone who is a true Beer Nut owes it to himself to visit the GABF Festival in Denver at least once in his or her lifetime.

So when are you going?

Here are some pictures to motivate you.