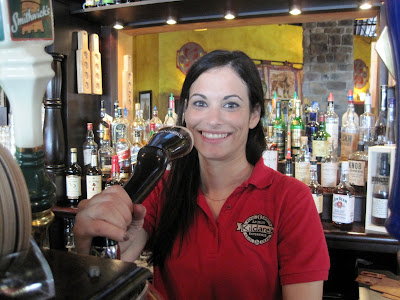 I found Kildare's Pub quite by accident in Newark (that's New-Ark), Delaware during a summer college visit to U-Del. On a somewhat tight schedule, I didn't have time to perambulate around the place or chat at any length with the staff—though I always find time for a brew. And Irish pubs—especially ones that are built in Ireland and shipped here—are designed for lingering. So when my youngest had to interview down at the home of the Blue Hens, I made it a point to stay at Kildare's for a while, to savor the ambience as well as the food and grog.

In keeping with that ambience, I was met at the door by an apparent Irish beauty named Rikki Goren—who turned out to be 100% Russian. But no matter. This very first hourly employee of Kildare's had risen through the ranks to managerial status, even handling such duties as opening up other Kildare spots around the country, and the company has seven of those now. This "colleen" with the stunning smile was also adroit behind the bar, drawing me a pint of Guinness, and drawing a cloverleaf with her tapdraw on top of that signature creamy head. She said that had been the result of hours of intense study at St. James's Gate during her formative pub years.

One of the wonderful things about taverns, pubs and beer halls is that the experience and atmosphere differs with each one. A cozy snug in an irish pub may offer the same beer that's available at a German Biergarten, but the atmosphere is vastly different, from the actual table at which you sit, to the delivery of the beer to the table.

At every Kildare's, there are different "atmospheres" for the thirsty traveler to choose from—a Pub Shop setting, a Gaelic period section, a Cottage area and a Victorian area. Each has its own motif and they each blend seamlessly into one another. Their welcoming nature makes it easier to understand Brendan Behan's classic line: I'm a drinker with a writing problem."

You'll also find a bicycle somewhere in every Kildare's, a testament to the main mode of transport between Eire's various towns and pubs. And, true to its Irish roots, there's an actual tapestry of the Book of Kells.

Newark Kildare's also has an impressive beer list beyond the de rigueur Guinness, and under the watchful eye of Rikki Goren, it's in constant flux. Offerings from Troeg's, Victory and many others give the Beer Nut plenty of goodies from which to choose.

Food is a big part of the experience at any beer-drinking emporium, and Kildare's has a menu that is true to its Irish heritage. My review of Irish pub food usually centers on its Shepherd's Pie, and as the picture to the right will attest, this version is most appealing to the eye. It's got a great Irish flavor, too, but it's meat component differs from most in that the meat (both beef and lamb) is offered in chunks, rather than ground as it is in many Irish pubs. Rikki advised me that Kildare's had just switched to the chunk version and added lamb in an attempt for more Irish authenticity. The flavor combo worked well, but I still prefer the ground meat in my Shepherd's Pie. But the dish paired nicely with both a Guinness and a Victory Festbier. The missus ordered a Veggie Burger that she claimed was absolutely delicious, and my potential Blue Hen had a Buffalo Bleu Burger which he declared to be excellent.


And if he does indeed get to wear the "Fear the Bird" shirt I saw on so many of the students who thronged Main Street in this college town, the PubScout will at least have a comfortable, welcoming Irish pub in which to rest a while when he visits, enjoying good food, good beer and a special ambience.


So show some Irish generosity and throw some coins into the can. When I have enough, maybe I'll buy you a "Good-Luck" Guinness, with Rikki Goren's signature cloverleaf on top.
Click on Rikki's picture to the right to view the rest of the photos.

©Kurt Epps 2011 All rights reserved
Posted by Kurt Epps-The PubScout at 8:14 AM