Politicians are not very popular among average Americans these days, though they probably never have been unless you worked for one. But consider the hazards of the pol's journey. Many complain of the endless round of "Rubber Chicken" dinners they must attend to raise funds and gladhand the party faithful, which, admittedly, could get old quickly.

And one of the many criticisms you hear of our elected officials today is that they are "feckless" (with "feck" being used as a synonym for testicles) and either unwilling or unable to do the right thing for fear of offending some voter bloc.

Well, fear no longer. An event (new to me and probably most of us in the East) might just be able to give the politicians two things: a new menu item for those fundraisers and more feck. It's called a Testicle Festival. Click the link you just read over for an earthy description. There's a milder version at the bottom of this column, too. It's the link sent to me by one of my Arizona readers, who, probably tongue-in-cheek, asked me for a beer recommendation that would complement this delicacy. It's no small irony that my recommendation was for a Nut Brown. I also think LeCoq's Imperial Stout might go well. Unless they taste like chicken, which opens up a whole new world of opportunities.

Cheers till next time! 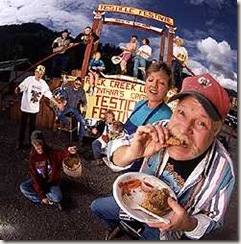 Diners can 'have a ball' at testicle festival

Update! Apparently the servers of the link up top are being overwhelmed by my faithful readers, so until the Feck Fever subsides, try this most interesting link, which says, ironically again, that they DO taste like chicken! Be sure to learn about the contests that take place at these events, and check out the letter to the editor--and the author's response!