It was supposed to be just a P-P stop. You know, after two and a half hours on two wheels, a pee and a pint. Get off the bike, shake the tail feathers a bit, make a pit stop, get a refill, have an Alvarez in the shade, and head for home.

And then Frank Lyons magically appeared in front of me. I had met Frank at a Washington’s Crossing Brewfest over a year ago, and I’d promised him I’d stop by to review his place, the historic Continental Tavern in Yardley, PA.

I did stop by. Three times, in fact. But the elusive Mr. Lyons was never in the house, so I’d pretty much given up hope of ever seeing him again, much less sitting down with him. We chatted a bit in the parking lot, and he informed that his “beer guy” Ross Adrian was also on premises, and this would be a perfect time to talk. So in I went.
Ross Adrian, the general manager, told me he had just had a Stone Tap Takeover the previous night, and he had seven Stone Beers in the twelve-tap set up. When he came on board, there were only two beers that could qualify as “craft” beers, and the rest would probably not even qualify as beer to craft beer geeks. So he set out to build a craft beer venue, starting with Troeg’s, River Horse, Victory and Yard’s beers. They did very well with the demographic of mid-20’s to mid-50’s that frequent this historic building where the staff seems to be on a first-name basis with every customer who comes in. So he continued the mission, increasing the tap variety and expanding the bottled collection to over 100.

“The IPA’s sell the best, by far,” he told me. The array of Stone IPA’s on tap, from a session to a Triple, should keep them satisfied for a while. He still has Coors Light on tap, but “That’s only because the boss likes it, so I can’t bounce it.” Discretion is the better part of valor, even in the beer business. If the boss ain’t happy, ain’t nobody happy, I suppose. 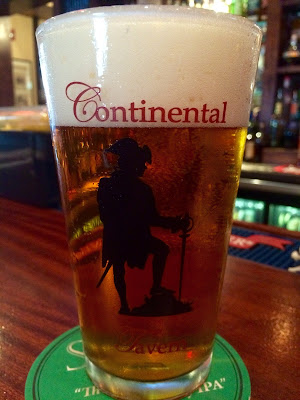 And as you will learn, “happy” is a critical concept for some visitors—nay, residents-- of the Continental Tavern, which used to be a hotel that housed a library. Ross happened to mention the haunted history of the tavern, causing me to pause, albeit momentarily, from devouring my delicious BLT (which went beautifully with a Stone IPA). I inquired to learn more and he shared some bizarre stories about past and present paranormal happenings that have occurred throughout the building, thereby adding the extra “P” in the title above.

“There’s a pit under the kitchen that we had to open up todo renovations. We found thousands and thousands of artifacts downthere—including a bloody corset, a purse and the murder weapon.”  Many of those artifacts are visible in shadow boxes around the bar and throughout the tavern. He also shared some actual footage of a dancing cocktail toothpick caught by the night manager in the wee hours while locking up for the evening.
“We’ve had the Ghost Hunters in here, and the minute they walk in, all their gizmos start going off,” Adrian laughed. “But Frank is the guy to talk to if you want to hear the weird stories.”
So up into the “Inner Sanctum” of the second floor I went to chat with Frank Lyons (whom I began to suspect was really a ghost because of my failure to meet him in person for so long).

Frank, a former airline pilot and possessed of a very professorial demeanor, shared with me stories and photos that were worthy of an episode or two of  “Haunted History.” What was supposed to be a forty-five minute break turned into a fascinating two-hour history lesson. He provided photos of repeated guests with “following orbs,” shared amazing stories from his daughter Colleen, who, in her youth, had the ability to see and hear the ghostly residents her father could not, and he talked about the many people with sensory antennae like Colleen who have visited and confirmed that there are definite presences in the house—and lots of them.
Frank, who says he doesn’t believe in ghosts (!), insists that none of the presences seem to be dangerous in any way. “They are simply earthbound for a variety of reasons,” he said. With the space he uses as an office being the former hangout of a mysterious “beautiful woman” (seen by a youthful Colleen), Frank allowed that occasionally he will be sitting at his desk working on tavern business and his calculator will suddenly “come to life, with written messages on it.” Lyons actually gives PowerPoint historical presentations to groups who visit, and sometimes does so at the drop of a hat, if he’s so moved. “The more they listen, the more they drink,” he admitted. His impromptu presentation to me was riveting, showing me photos of the archaeological digs that took place under his kitchen floor revealing a deep tunnel that likely led to the river.
It was also very likely a stop on the Underground Railroad during the Civil War, according to Lyons. “We’re just two blocks from the Delaware River, and since the slaves navigated basically by bodies of water and the North Star, that makes sense.” Most UR maps show a thick path right through PA and NJ right where Yardley would be. “The second oldest Quaker meeting house in PA is right here in Yardley, and the Quakers were fervent abolitionists, so that, too, makes sense.”

Probably. But what makes sense to me is that a place with this kind of paranormal history and activity is one of only two places in the city that serves “spirits.”

Of course, The PubScout didn’t visit the Continental Tavern for the “spirits.” He visited it for the beer available and the food offered, and both are top notch and reasonably priced.