Captain Craic and the CraftBrew Crew

He's the heart and soul of Hailey's Harp & Pub in Metuchen, and he's the reason so many make Hailey's a regular destination. If you're on FaceBook, he's all about the craic, and his engine never stops. He's the camera-shy Wizard of Brainy Boro, Chris Flynn, and, together with his trusty sidekick Moshe, they chart a steady course for good beer, good food and good times.

Yesterday, one of those memorable voyages took place to the storied Flying Fish brewery in Somerdale, NJ and the Iron Hill Brewpub in Maple Shade immediately after. From his own pocket, the Captain charters a luxury bus (with wifi, thankfully) and bathrooms (blessedly) since he provides "road soda" to all who attend his cruises to exotic ports of beer. The costs involved for passengers, usually members of Hailey's zany Beer Senate, are simply tour fees, which usually include more beer, and whatever they have for lunch, which usually includes more beer. 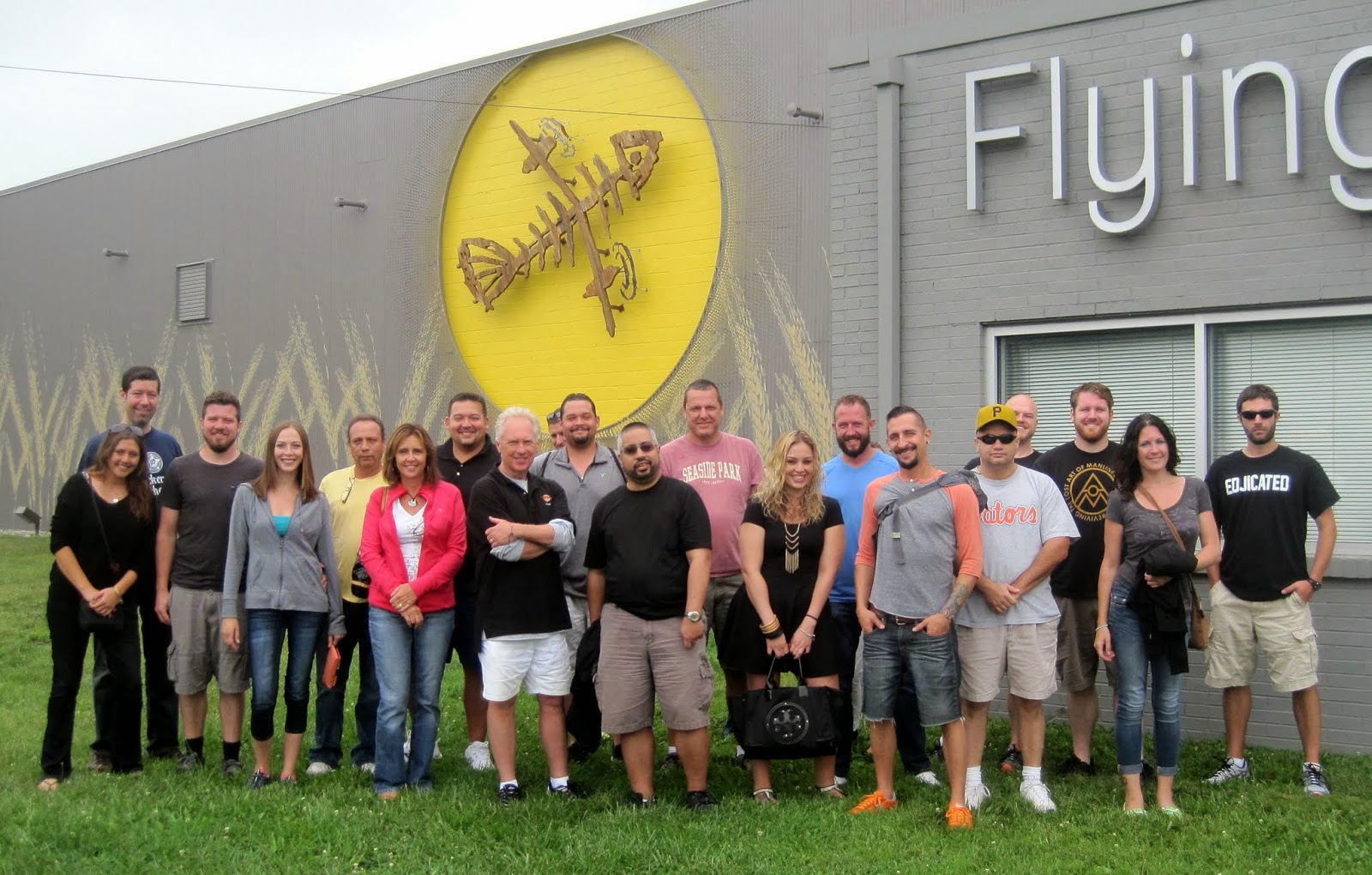 The Flying Fish facility, once the record factory of Motown mogul Berry Gordy, is nothing short of cavernous, as gargantuan bright beer tanks and fermenters tower over beer tourists. Rick Stype, brewery rep, led yesterday's tour, providing an informative, interesting tour--done in terms the layman could understand. He also provided some interesting info about the brewery regarding its eco-friendliness. 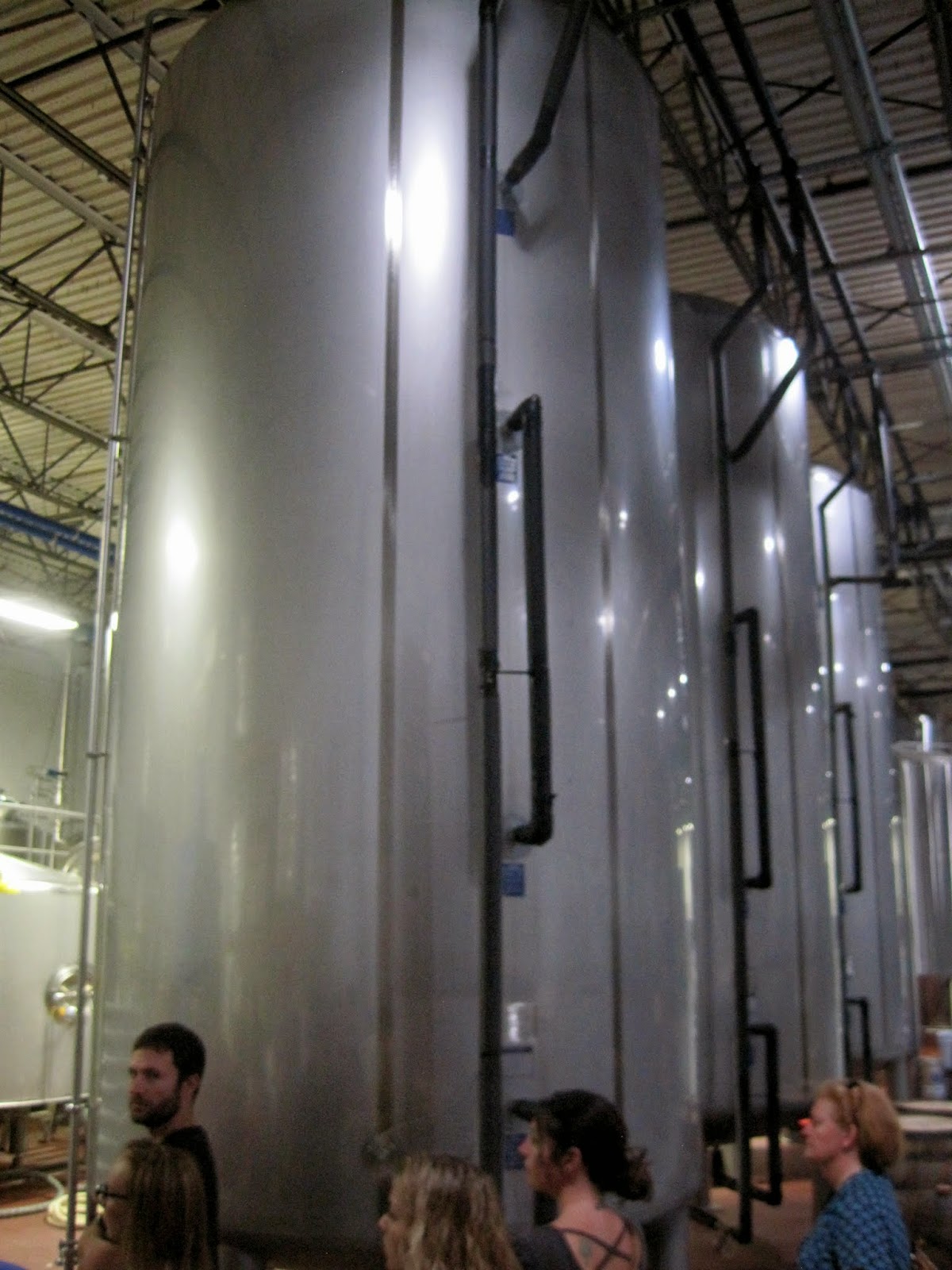 With its direction set by owners Gene Mullin and Andy Newell, Flying Fish is the "greenest" major brewery on the East Coast, though it's not easy--or cheap--being green. Mullin and Newell, who met when Gene was a bank client and Andy his loan officer, are to be commended for their approach, as well as for the wonderful beers that emanate from this decidedly local brewery.

The Brew Crew arrived at 11:30 (despite snarky protestations by the curmudgeonly Captain regarding the route), and when we did, no one else but Rick Stype and some servers were there. When we emerged from the tour, however, the spacious tasting room was filled with beer lovers, each carrying a full pour or a flight to enjoy at a table. Flying Fish, it appears, is a well-known beer destination.

The Captain and I enjoyed a chat and a beer--an excellent NJ350-- with affable and down-to-earth owner Andy Newell before the ship had to depart for lunch at the Iron Hill Brewery in nearby Maple Shade.

One of ten IHB's, the Maple Shade facility is also large, clean, airy and welcoming, and it produces some exceptional beers. Many beer nuts at my table had the Mahalo, Apollo, a summer wheat beer spiced with Grains of Paradise and lemongrass, but The PubScout opted to go big with #500. That's IHB's 500th batch of beer, and it's a beautiful, garnet colored DIPA that comes in at 11.2%. Exceptionally well-balanced, this DIPA will not suck your cheeks and lips into a perpetual pucker. But it will remind you why Brewer Chris LaPierre has some serious GABF hardware hanging on his wall. The cask-conditioned Sleeping Beauty, a 9.6% mellow, sherry-like beer with dark fruit and vanilla notes, was also outstanding. 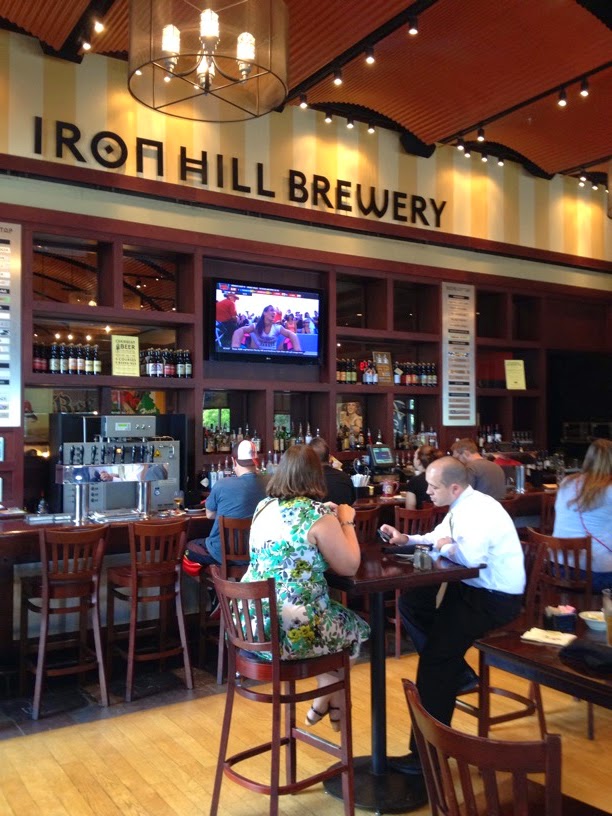 The PubScout did not have the opportunity to linger, but he will be making a trip down again to have some of the Bottled Reserves, like Russian Imperial Stout, Rauchbier, The Great Imperial Pumpkin Ale and a Rum-Barrel Aged Dark Humor, a collaborative effort with the Ithaca Beer Co.

Not wishing to leave empty-handed, The PubScout toted out a bomber of The Cannibal, a Belgian-style Golden Ale. Report to follow after I drink it, but as it won the GABF Gold in 2005, I probably won't be sharing any astounding news.

But hopheads will appreciate this news: IHB is going to celebrate National IPA Day on August 9--not August 7--when it brings in ten different IPAs from ten different IH brewpubs. The festivities start at 1 PM. (PS: get the Kennet Square Burger... just sayin') 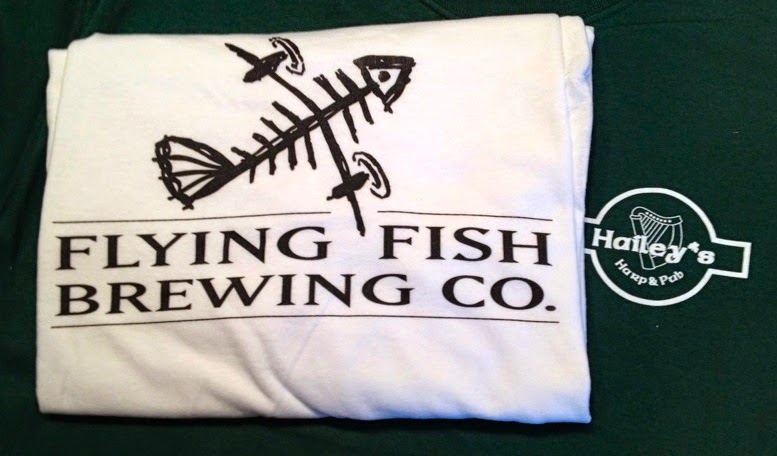 Both Flying Fish and The Captain provided some very nice take-home memorabilia in the form of pint glasses and TWO shirts.
The dark green one from Hailey's should be mandatory at the next Beer Senate in September, when The Captain and Mo ramp up the program. If you like beer and craic, you can't go wrong with what these two wise guys devise. That's wise guys, not "wiseguys."

You may even get a picture of the two-most camera-phobic people on the planet--The Captain and Moira.

But to preserve Moira's anonymity, I won't tell you which one she is in the picture at right.

There are more pictures available to download for free here and here.