I stopped in to the Rail House Pub in Rahway the other night to take in the first of their “Guest Tap” series. That’s a program initiated by Alan Maslo in which  a different brewery is invited into the pub to take command of some of the taps. The program occurs on the first Tuesday of every month. Since the first guest brewery was one of my favorites—Yard’s—I figured to grab some of my favorite Thomas Jefferson Tavern Ale or two and a big juicy burger. The TJ, to my great disappointment, was unavailable. Still, my other favorite, George Washington’s Tavern Porter was up, along with the very unique Ben Franklin’s Spruce, and Yard’s Brawler, a very solid session beer.

During my visit, I learned that Maslo, who “gave birth” to the Rail House Pub concept and who has been its constant caregiver, will be picking up stakes and heading south—way south, as in Georgia—to pursue a new career opportunity.
“It’s very painful,” said Maslo. “My heart is here, and I often have debates with myself about whether I’m making the right move, but I have to do what’s best for my family.” 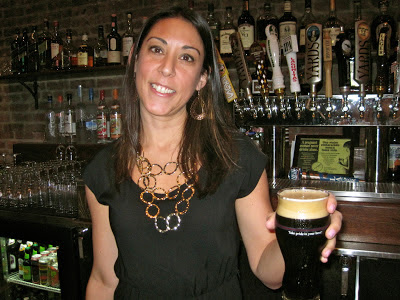 Taking Maslo’s place will be Jennifer Orlando, an amiable brunette stunner who takes the train to her new place of employment. “It’s so convenient,” said Orlando. “No driving or parking hassles, and a fifteen minute ride drops me right off at the Rail House front door.”

She, at least, knows where to go. In discussing ways to make the relatively new pub more visible, owner Larry Fishman, Subscout Gonzo, Maslo and I put our non-beer heads together to brainstorm about signage. With no handsome “Rail House Pub” sign hanging perpendicular to the building to attract passersby on the sidewalk, the only things that indicate there’s a pub are some of the neon signs in the window. And by the time a passerby sees them and the pub, he may be past it.

That’s a shame, because this intimate, brick-lined, friendly place should be—could be—a real destination, and not only because NJ Transit riders can hop off to enjoy a pint (or two) with a scrumptious burger and still have change from their 20-spot.
And with more guest breweries on tap in the coming months, the beer offerings will proliferate even further. Troeg’s from Hershey (formerly Harrisburg) will be up in march, with Six-Point and River Horse following respectively in April and May.

Here’s hoping that Jennifer and Larry can find the right formula to put the Rail House Pub on the map for more than just the locals.