Can Koch Can? Can Due!


After years of resistance to a beer industry trend towards canning craft beer, none other than Jim Koch has decided to take another look.
But true to his purist form--and  the dedication that made his beer company successful-- he will do so on his terms--and with his own can. read the link above.

It's a fascinating story, as well as a credit to the guy who many believe to be the catalyst of the American Craft Beer Movement. The PubScout dubs him "The Cartographer" simply because, in my humble estimation, he did nothing less than put American Craft Beer on the map. But, more than that, I have found that every SA product I have sampled in the years since I helped Koch sign The Beer Drinker's Bill of Rights in Philadelphia, whether it's on my favorite list or not, is true to style. And master brewers have shared that sentiment with me. That kind of commitment deserves kudos. (Hint: pick up some of his outstanding Double Agent IPL.)

Koch, however, would not have even made the attempt if he weren't convinced the beer could retain its authentic taste in its new digs, which is why he resisted for so long. Recent developments may soon find him a supporter of cans, but an interesting note from the article highlighting the importance of olfaction and retro-olfaction deserves mention here: 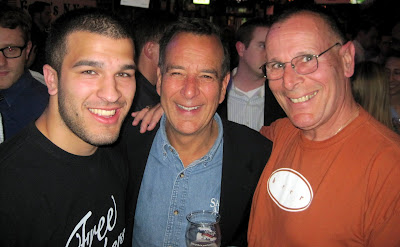 Of course, neither do long neck bottles, which is why beer tastes best in the proper glassware.
We'll see if "better beer" can stay that way, but I wouldn't bet against  "Can-Can Koch."