Behind the Tilted Kilt: Those Sacral Dimples Ain't Goin' Nowhere 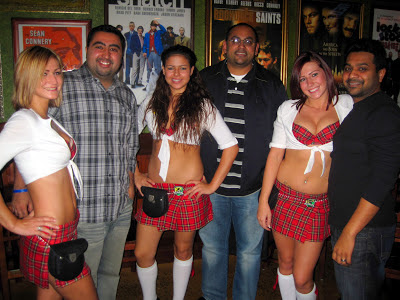 Three young Indian entrepreneurs looked at the stretch of Rt. 18 from Rt.1 south to Rt. 9 and discovered an interesting logistical fact: There were only two places which could offer serious competition to a new pub/eatery. One was Hooters (and we all know what that indicates) and the other was a place called Gusto. So Mihir Kothari (L.), Tito Shah (C.), Vishnu Seetharaman (R.) and Chicago-based Mansi Chaudhari decided to plunk down The Tilted Kilt, one of 60 now in operation in the US, in the Brunswick Square Mall. There is another Jersey Kilt up in upscale Hoboken, a bustling burg with no shortage of beer bars.

It would not be unfair to say that, in some respects at least, The Tilted Kilt and Hooters play on the same field, offering scantily clad female servers whose main job after serving is to offer affable, friendly eye candy to the male clientele, though The Kilt goes one better and offers kilt-clad male servers for the distaff patrons. No contest there, if you ask me, but keeping the fair sex happy is vitally important.
According to Mihir, who, with his partners went west to company HQ in Tempe, Arizona, the two most vital components of a successful pub are its food and its entertainment, and he does not deny that the plaid kilted lassies are part of the latter. He clearly knows what attracts the male clientele.
The Kilt establishment also boasts 31 TV’s (as opposed to the 14 at Hooters), and a couple of VERY large Projector Screens, all with a variety of sports to keep the attention of the patrons (when they’re not ogling the staff).

The food is pretty standard pub/sports bar fare, and the Lunch Special I had was a delicious Half-Turkey sandwich on a sub roll accompanied by a bowl of Chicken Noodle Soup. I washed it down with a T-K Lager, a house beer made by Killian’s. Also offered is a beer unique to the East Brunswick pub called TK Cold Ass 33 made by—take a guess—Rolling Rock. One of my neighbors at the bar commented as to the high quality of his Big Arse Burger—which is what they’re called at The Kilt, and the menu offers a nice variety of sides, entrees, pizzas and other mixed drinks. One was called a “Paddy Bomb,” made by taking Three Olives Orange Vodka and Blue Curacao and dropping it into a glass of Red Bull. Go for it if that’s what floats your boat, but The PubScout will stick to good beer, thanks. 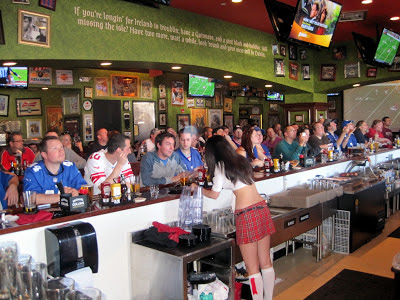 The taps, invisible if you sit facing the outside window due to glare, offered a wide range of beers and cider. The PubScout would suggest printing out a simple tap beer list to give to those seated on the sun side, which would obviate the need for the bar-server to turn around and rattle off which are currently on tap. No biggie, though, as there are other things to catch the eye.

My server, Sara (below), a mahogany-haired stunner who’s studying criminal justice, was a delight to chat with—and look at. She and her Mary Jane –wearing cohorts are required to pass a role-play test before hiring which gauges their friendliness level, because in addition to their serving duties, customer relations plays a major role. And with their tasteful, albeit skimpy, kilts helping them to bust out all over, most guys would have no problem sitting and chatting with any of them. Kothari said that those costumes are an integral part of the business mode, so lovers of visible sacral dimples need not fear. Christina’s currently the champion, by the way, but a few return visits might yield other candidates. Just remember: hands off. I spoke to a few of the girls, and without exception, they all “loved” working at The Tilted Kilt. 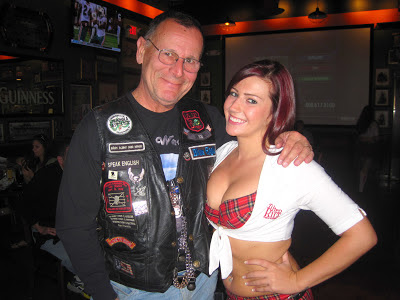 As mentioned in my earlier column, the owners expect to be able to enclose and heat the outdoor patio area soon, pending municipal approval and the unraveling of red tape. They are aiming to have it done before the Super Bowl, but it’s going to be close. No matter, though. Whenever it’s done, it will add another dimension to the already-pleasant pub ambience.

Interestingly as well, the owners were very warm to the idea of The PubScout hosting beer dinners at The Tilted Kilt once that work is done and Monday Night Football is concluded. Spread the Beer Cheer, I always say.

As for regular old-fashioned pub cheer, there’s plenty of it at The Tilted Kilt, and the owners are all about spreading more. They’ll be hosting a Hurricane Sandy Relief Fundraiser Wednesday which will be broadcast on WDHA 105.5, and—get this—not just a PART of the proceeds will go to Sandy victims. ALL of the money raised will go there—and to help the staff members whose homes and families were negatively impacted by the storm. Perhaps that attitude explains the affinity the staff has for the place.

The PubScout recommends a visit—especially for the Wednesday affair—but really, at any time. The Tilted Kilt follows my precepts of Good Pubs, Good Beer and Good People. More pics here.