How Bikers Deal with the Polar Vortex

Even under the best of conditions, January is not considered great riding weather as far as most bikers are concerned. So when the Polar Vortex arrives with temps in the single digits, what's a dedicated biker to do?

Drink good beer and eat good food in a good pub with good people, that's what.

So it was that on the coldest day and night in many a January, sixteen hardy folks assembled at the Harvest Moon brewpub in New Brunswick for a special beer tasting.

The event was arranged by the peripatetic Ben Pollak, who will be the subject of an upcoming story in the March issue of the new NJ Brew Magazine which will be written by yours truly. And without giving away the content of that fascinating story, suffice it to say that Ben Pollak lives a most unique life. That he rides his own motorcycle year-round should tell you something of his nature, though even he opted for four wheels on this bitterly frigid day. So he's not totally nuts. 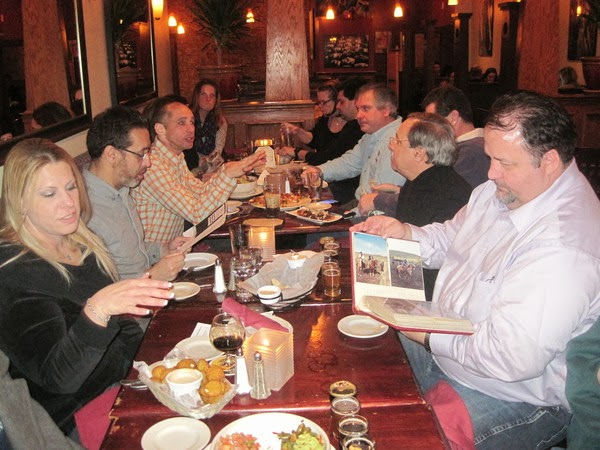 Because of a special working arrangement he has with The Moon (pick up the March NJ Brew for the details), he was able to secure the cavernous upstairs space for a special beer-tasting along with food for sixteen of his biker buddies. And for the rather remarkable sum of $12, those buddies sampled six beers and ate their fill of some excellent food, including an incredible pizza that is not on the regular menu.

The Harvest Moon beers were especially well received also. The Moonlight Kolsch, with its distinctive nose, crisp mouthfeel and lingering finish began the flight, and it was followed by a very nice Harvest Hefeweizen. The classic Jimmy D's Firehouse Red came next (Google Jimmy D'heron for the background on that story if you need to) and an exceptional, malty Downtown Brown followed it. Full Moon Pale Ale, which this writer considered outstanding was the penultimate beer, and the  BBON (Best Beer of the Night) in The PubScout's opinion was the Black Friday Imperial Stout.

Rich with coffee and chocolate tones and with a semi-viscous mouthfeel, this was the perfect beer for cockle-warming.  There was even a version going around that had a dollop of vanilla ice cream in it.

And on this night everyone's cockles needed some warming.

But that was also achieved by the excellent company interacting over good beer and good food in good pub.

Judging by Ann's smile, her cockles were toasty indeed.