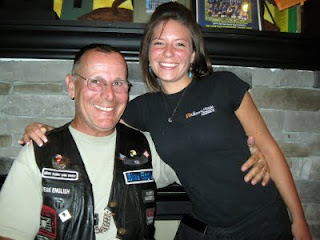 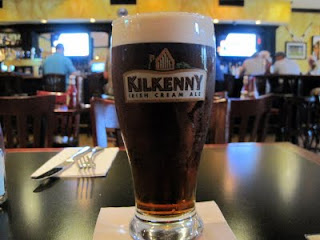 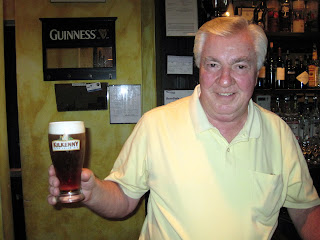 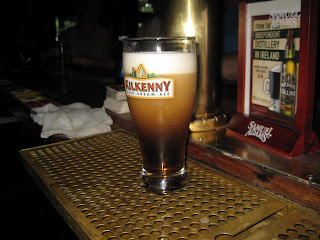 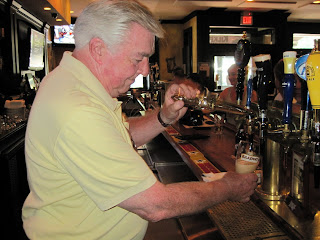 Because it had been a while since my last visit to this classic Irish pub, I arranged to meet some of the Wilde Hogges there for a burger and a brew. We won't mention Larry's gag, as this is a family place and swearing isn't allowed.

But the place itself hasn't changed, and that's good. Same friendly staff, same great food, same good beers. Well, not exactly the same good beers as those at my last visit. There's been an addition that is worth mentioning--an Irish import called, appropriately, Kilkenny Cream Ale.

Manager par excellence Damien drew it for me using the "slow pour" method, and the result was phenomenal. Amber in color, with those inverted nitrogen bubbles you've come to know by watching pints of Guinness get filled, KCA is a delight to eye, nose, tongue and palate. Creamy, with a head so thick you could use an ice cream scoop to make a permanent hole, this ale is simply killer in The PubScout's book. Of course, Damien allowed as to how it is made by the Guinness folks back on the Auld Sodde, which explained much about its appearance, smoothness and taste. It's a perfect beer for foods, especially meats, burgers and potato dishes like Shepherd's Pie. It's also perfect for those who may have a hankering for the smoothness of a Guinness, but want to go a bit lighter on the roasty, toasty malts.

I confess that I don't know many other places that have this on draft, but if you find one (and you will at Kilkenny House in Cranford) set yourself down and get ready for a feast. But insist on the slow pour. If you're real lucky, Jen might come over to say hello, but she only shows up for the guys with juice. (See photo above)

Kilkenny Cream Ale might just hold me over until August, when the Marzens start to make their annual appearance.
Posted by Kurt Epps-The PubScout at 7:41 PM